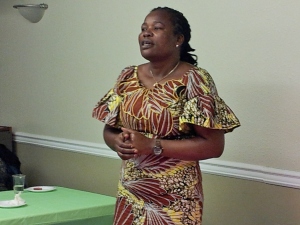 Ida Mukaka, field representative from the Stephen Lewis Foundation, made her inaugural trip to Edmonton April 26 to spread the word about what is happening with some of the projects funded by the Foundation in sub-Saharan Africa.  Ida is a compelling speaker; she speaks from the heart and everyone in the audience was captivated and moved by the stories she had to tell.

You can see more photos from Ida’s presentation in our Photo Gallery.

40 grandmothers from 5 different Northern Alberta Grandmother Groups gathered Sunday afternoon April 27 for a “Chat With Ida”. Ida Mukuka, from Zambia, is a Field Representative with the Stephen Lewis Foundation (SLF). Through her work, she visits SLF funded projects throughout sub-Saharan Africa offering support and direction.  The GANG was pleased to host Chat With Ida on her recent Canadian visit.

Through a series of photos and many stories, Ida shared how SLF funding is making a profound difference in the lives of African grandmothers, their grandchildren and their communities.

One such photo story focused on children who were receiving lunches funded through a SLF project while attending their local school. Ida shared that when this lunch program first began, the children rushed to the food grabbing handful yet eating very little as they stashing the food away. Over time the children realized there would be enough food for everyone and their behaviour shifted. This resulted in more organized distributing of food, food being eaten, and spontaneous sharing of food among the children; the school attendance increased as did the children’s learning.  One photo showed many smiling children holding food packages they were taking home for their Grandmothers. Positive change was evident.

We saw many pictures of grandmothers who were busily involved in SLF funded projects. Ida emphatically shared that their smiling faces were an indication that these heroic women’s lives had improved; they were less stressed and coping better as they had food and housing for their families … and now many of their grandchildren were attending school regularly.

Judy Hayman, GANG chair, thanked Ida for sharing with such passion and humor how our local grandmother groups were making an impact. One grandmother shared as she was leaving “Thanks to Ida I am going home to work even harder!”